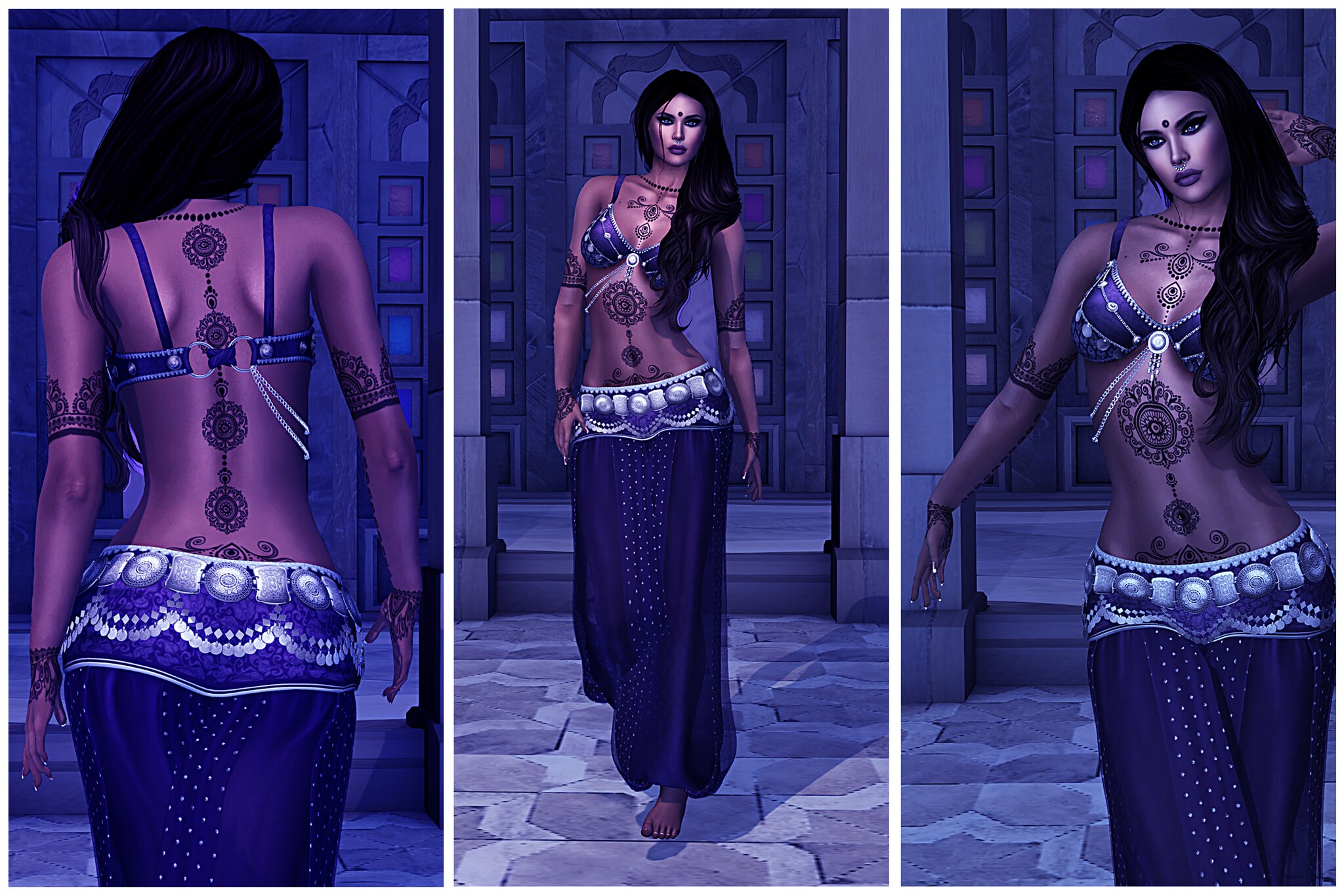 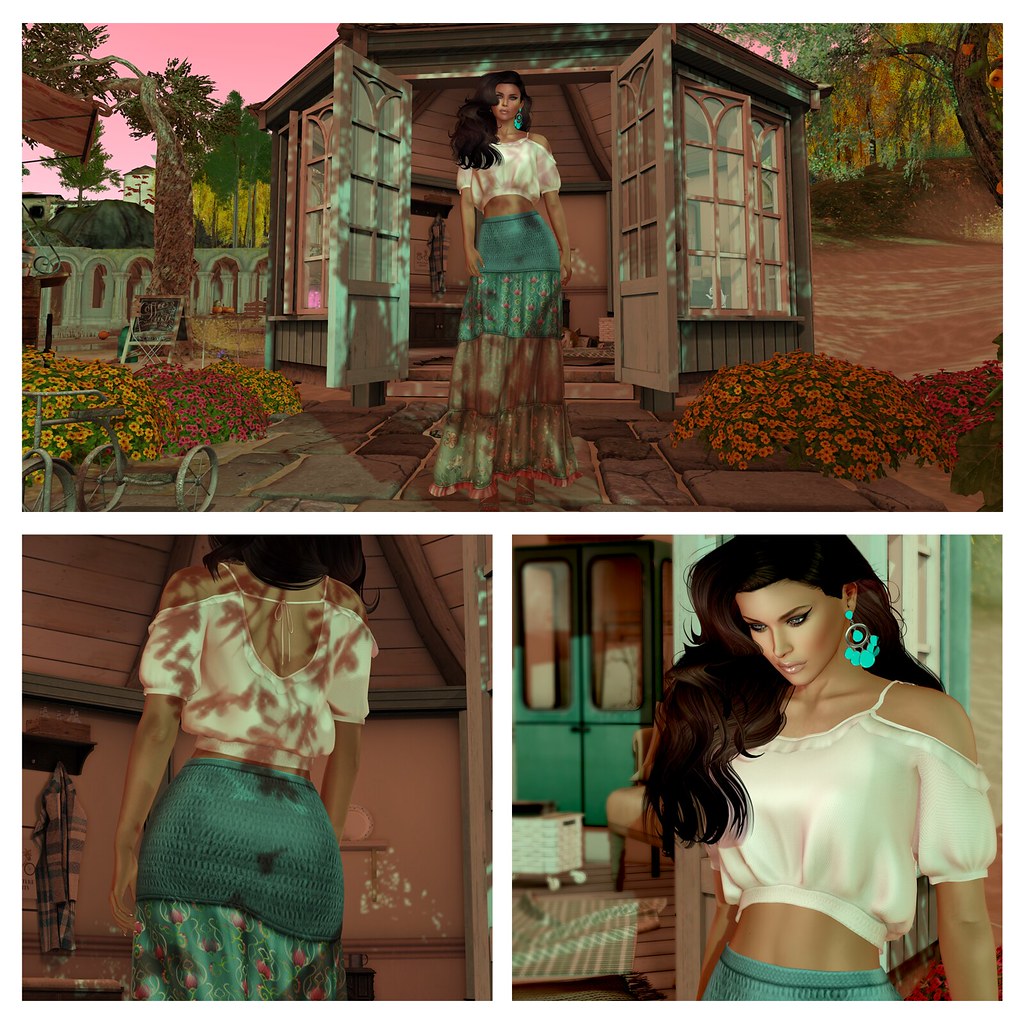 It’s been a few years since I blogged anything SL. I thought after how crazy this year has been for me in RL (good and bad) and since the winter months are coming, I needed to dabble in some creative things connected to SL again. So, I’m dusting this baby off!

The blog has a new look, to go with a new era in my blogging activity; though it will be subject to tweaking until I get it looking just right! Also, I have been experimenting with iMovie in order to make videos in Second Life. I recorded my first video showing off the most recent Luxe Box items, but I think I’m just going to treat it as practice and not post it. The thing was 1hr 11min!

Uh, I need to speed the hell up! Yea, wish me luck with that!

So, on to the outfit…

This Anisha Ruffle Blouse and Ziya Tiered Skirt is Zaara’s most recent release for October’s Collabor88. I have long been a fan of Zaara Kohime’s work. I believe the oldest piece that I have from her was created in 2008/09. Her textures are always exceptional, and her designs gorgeous. It’s always a treat to see her new creations.

I have had this bridal ensemble from Arya Boutique in my inventory for a little while, and I was looking for the perfect backdrop to shoot it against.  I finally found it!  When I began the post processing work, I sort of got lost in tinkering with different effects and it turned into more of an art photo than a blog photo.  I decided to fix up a couple of different photos to showcase the look for my blog entry…

I’m not going to write much in this post because I am currently listening to some Bollywood music and my concentration is pretty much nil at the moment.  Haha. I have only been meaning to post  about the Pose Fair since it began and I have been there more than a few times to look around.  I had even been added to the bloggers list which I had forgotten I’d applied for.  Anyway, it was nice to browse before he fair officially opened, and I’d like to thank  all the pose creators involved for their efforts.  Without great pose makers, blogging and photography wouldn’t be nearly as enjoyable!

I just wanted to highlight a set I thought was super cute, as well as a pose I used from another maker just because I love how each pose by this creator is always so expressive and shows some drama in the body positioning.

Baffle! has put together a nice little artist’s set complete with five poses, four paint brush attachments, clothing and tattoo layers with paint splatters, and an easel with paint splatter textures.  I was so focused here on trying to be Picasso, I got paint all over my new top from Zaara!  Oh well, the beauty about virtuality is you can clean up your messes with a click of the mouse.

See…all clean!  But then I dropped a brush on the floor and had to pick it up.  I did it in a rather dramatic fashion with this pose by Di’s Opera.

While the pose fair is at its end, you will find this set from Baffle! and the pose from Di’s Opera at their stores when the fair is over.

Originally, I thought I’d squeak out a blog post before Christmas, but unfortunately had some technical difficulties.  So…this is my holiday post!

I was unable to access SL on a machine that was truly equipped for it the entire time I was away at my family’s house.  This meant, no shopping, and no photos.  Sad, right?  Haha.  I could sometimes log in for about five minutes before SL froze up and kicked me off.  Anyway, I am home now and before I go anywhere again, I need to get my laptop’s wireless adapter checked.  No Wireless = No Fun.

Today’s look is all Zaara!  I have wanted one of the kurta sets for a long time, and chose the maroon and green color combo to fit the season.  I think the patterns and colors of all these available sets are very richly done, as all the Zaara clothing is.  A great part about the sets is that the pieces are all sold separately as well, so you can create your own kurta/churidar/dupatta color combination (tunic/pants/scarf).

One of the newest releases from Zaara are these jeweled mojris.  They are a bedazzling, cute set of flat footwear with a slightly pointed toe.  There is a vast color selection to choose from in store, and there is also a previously released version without the jewels.

One last thing before I sign off on this post…from myself, and my sweetie Zaap…Happy Holidays!